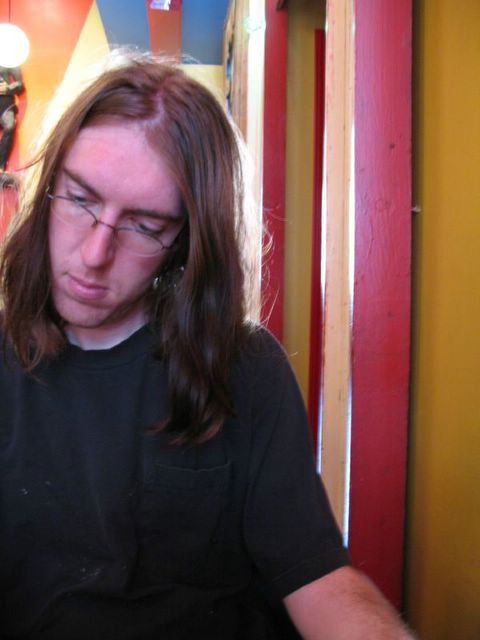 Jeremy P. Bushnell’s poetry has appeared in Shampoo and Zafusy. He has also authored Imaginary Year, a serialized fiction experiment which ran from 2000-2005 (archived at ImaginaryYear.com).

In his spare time he serves as a member of the improvisatory drone collective Number None, and maintains a blog, Raccoon. He lives and works in Chicago, IL, and can be contacted at jeremy [at] invisible-city.com.

The poems presented here are taken from two separate manuscripts-in-progress. "Tracing," "October Reception," and "Autogeddon Houseattack" are from Devotion Manual, a manuscript written entirely in hypnopompic states of consciousness, and "Alert the Mega," "The Query, In Time, Will Function," and "Help Koranic Identifiers" are from Interdeterminacy, a manuscript collaged together from material found on the Internet.

Lines are echoes of things. To

the smallest structures can be

the “cellular Breton” in the cloud chamber.

Observe the needles and pins that inhabit

a ring of glowering apes;

a phantasmal episode at the mall,

the way the ending

the preparing of crops,

this memory of your unfixed face.

The kitchen; the frame

a “utensil of the head”

into the future of harvest

another episode; a chance to organize,

You sang it on the hill

and waited for distress to answer.

O mayhem in the cells—

and no plane is ink-designed.

dangles its hairs, in action,

Sideways at the skinhead house

where a circle tops a sphere

to be decompelled). A whole target

a scratched-out version of the other side.

Why no mindset? Why fly

at all? The resources, answerless,

are actually the automaton’s heart. The first pyramid you see

stars. The blessed dead lament for thee. A sound currency

is to be preserved at all hazards. Demonetized ingot-traffic

speech-ballooning among the quantity theorists, whereas logic and

antics, radial inflorescence in the eye, green and bambino-purple,

Try symmetry and see if you can stop viewing the supernova. My

with the summons. This cheeseburger prepared on bun.

Advances in the broiler industry, midvale slag, all those in favor

me to move to cell A-12 for the remainder of my stay.

I hung my torso off the bunk and did my routine again.


THE QUERY, IN TIME, WILL FUNCTION

A matter of generalization hierarchies. In beamtrees,

nodes are shown as stacked circular beams: where nested treemaps

use nesting to indicate a parent-child relationship, we use overlap.

The resultant stack of rectangles is saved to a folder

named “rectangles.” From these, we can implement a house

L, B, W and H parameters for variety. The continuation

is shared with threads, twixts, and catches, the support

is non-trivial. New keys can be inserted by placing them

at an open leaf and percolating the element upward

until it sits at its proper place in the partial order.

I’d like to offer you a nude eel. Live gymnotiformes,

with a lack of pelvic girdle, teem in the pools.

Read and be interrogated.

Here a host of urban monads hover, like Armani,

or (more darkly), the violent conflict that created

the orders of valour and corps. Atavistic, troubling.

My father said nothing but I could feel him radiating

I-told-you-so’s down the pew. A kind of work

which you may call endless: she spins and weaves

and cuts with full authority. This type of X-Ray machine

is of no use. Iris scanners can be fooled by photographs.

of fan base. "Drug mule" couriers are flawed and in jeopardy

character-wise. Condoms full of cocaine etc. This is

a closed industry, with lots of egos. Probably Tylenol PM.

Rock says the movie was in 5000 BC. Rock says he'll never

Well we all know what happens next...Dolphin sandwiches

for the next meal. It's like their animations are battling

for dominance. A game can get corrupt, for no reason at all,

and you may need to sever. The things you once loved,

you will hate. The things you once hated, you will now love.

Every orthography corresponds to a single.